While snow blankets my yard outside, the paint brushes have been busy in the studio! It’s been a month of creativity – in addition to this project, I am working on some other fun things – they too involve pen and ink with splashes of colour. I’ve been still on an ‘animal’ theme of late, such as this Heron (magnificent birds!!)

And I’ve also been playing around more with just ink. You can say and do a lot with just black and white! This sheep, I find, has a pretty serious look, don’t you think?

So 2022 looks to be a great year for this project – I have some plans all sorted out, and I am pleased to report that about 65 art pieces were distributed in 2021, well above the one per week that was my original goal.

I hope you are well! Please take care of yourself and the ones you love. Let’s let compassion and kindness prevail, and I tend to think this is helped with art and creativity. Maybe you’ll pick up a pen and sketchbook? Send me some examples of YOUR art! (You can reach me by emailing FoundThisArt@gmail.com.

Big news from the studio today – twenty pieces are done and being shipped out this week. Lots of nature themed pieces of art, and lots of birds. (I like birds).

These are going to a few of the most amazing, awesome, funky, cool, independent bookstores around the world. I’m pretty sure the owners of these select stores will enjoy getting a few pieces of art and secretly slipping them to some of their favourite customers. Fun times ahead!

I had some fun over the holiday season, and prepared six pieces to share around the world, including ones featuring mountains, trees, birds, and trilobites. It’s the first edition of ‘from the studio’ for this year!

The craggy trees was inspired by an old painting in my parent’s house when I was growing up – I believe it was in my Father’s “den” (which was essentially a room with his slides, paperwork, a desk, and a bookshelf containing various interesting titles on all kinds of things, including ships, natural disasters, and field guides – you can never have enough field guides!). I recall a piece of art on his wall that depicted warped trees emerging from steep mountains. There is something amazing about the ways tree roots find their way among the rocks to the smallest patches of soil. They persist.

There’s also something special about birds on a wire. Sometimes when I drive home from the train station after work I can see a nice row of our feathered friends on the overhead wires. They are often pigeons, but I’ve also seen starlings there, and sometimes I can’t quite make out the species because the silhouettes just don’t provide enough clues. So, this wee painting of three birds can be whatever species you wish it to be.

So there you have it: Six pieces to start off 2020. Keep your eyes out, folks, you just might come across one of these when you are out on your own adventures. Let me know if you find one!

It’s been a busy few months! But that hasn’t stop this wonderful project from continuing. Art has been dropped in many places, from Australia to New York City, and on planes and trains!

Today was a chance to work on a few more pieces, and here’s another edition of “From the Studio“. A crow, birch forest, and jellyfish. Where will these appear? Time will tell. Stay tuned… 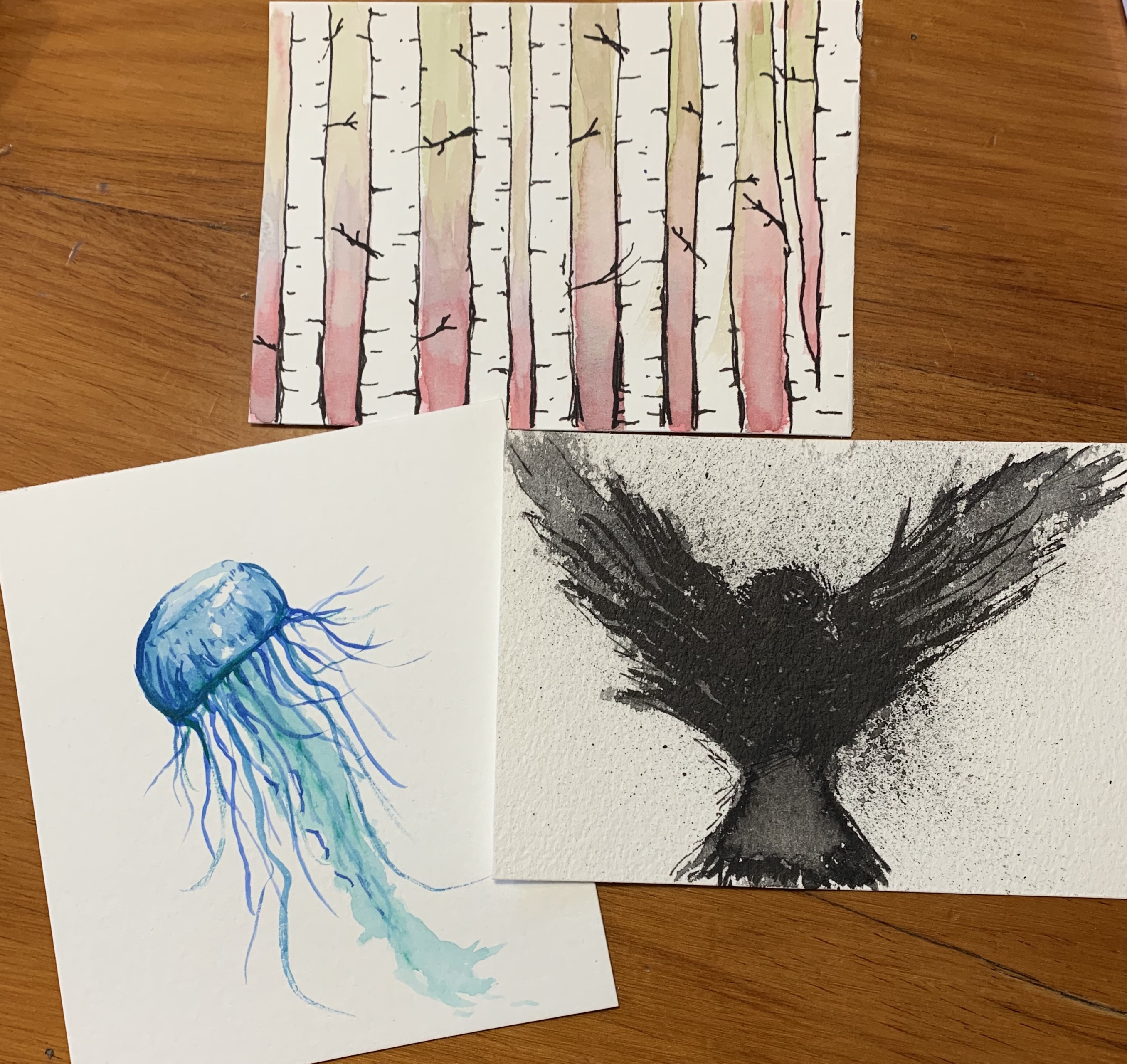 “Hope is the thing with feathers” writes Emily Dickinson.

I have always loved our feathered friends. They are magical animals, seeing the world from the wing, finding small insects among cracks in tree bark, and singing sweet songs. I often draw birds, and a while back I decided that a feather was a suitable thing to paint and share. Here’s the piece just after completion in the studio: 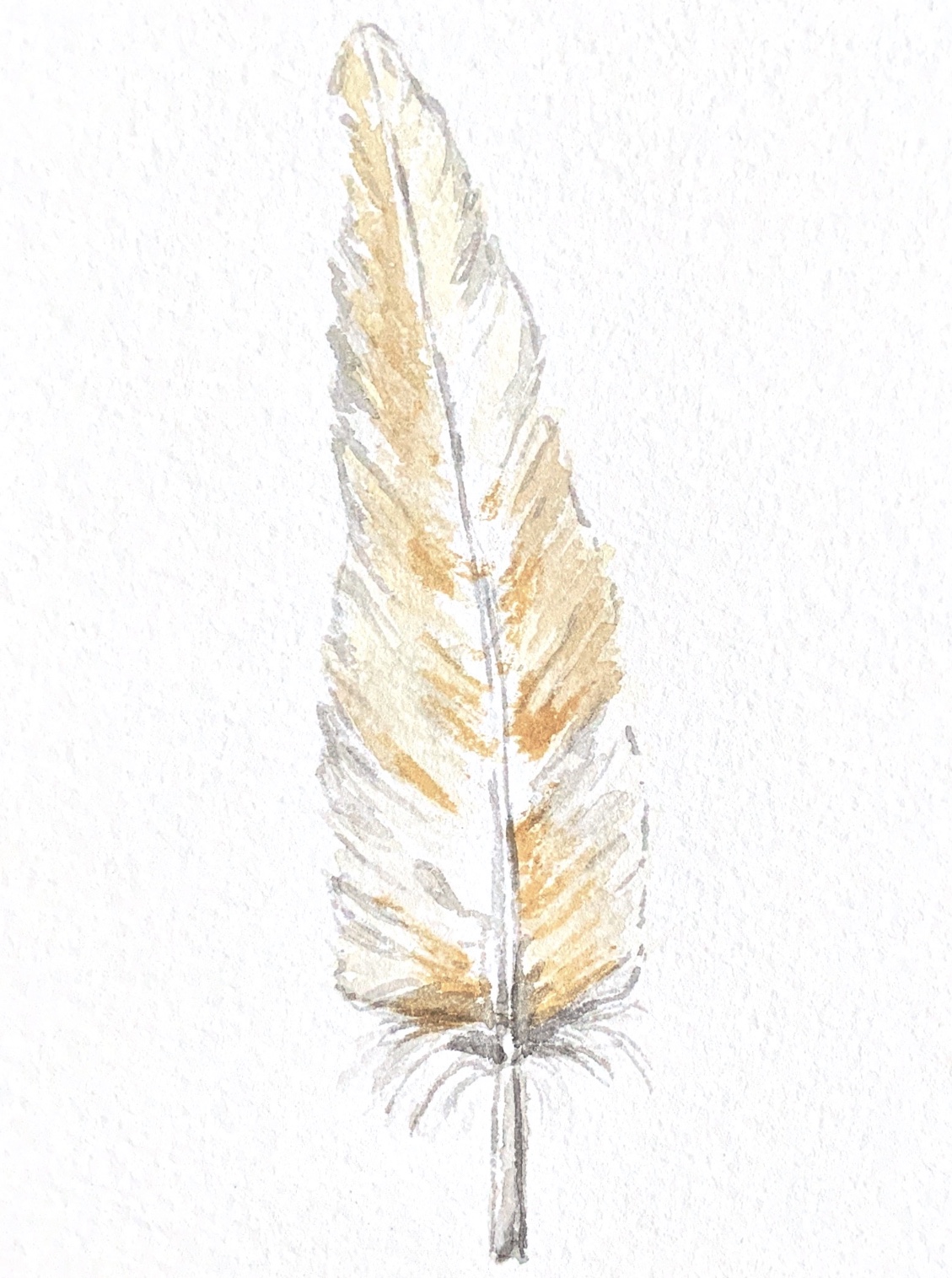 Several weeks ago the Feather was dropped (maybe by me? Maybe by a secret agent…?) at the Yukon Visitor’s Centre, in Whitehorse (Yukon Territory, Canada).

Here’s the drop location (next to the GIANT relief map of the Yukon):

It was found! Hooray! The person who found it wrote to me soon after:

…”I found your feather art at the Yukon Visitors Center in Whitehorse. It’s marked “#27″…. Finding this just makes the trip here all the more special. I am on a trip here, to my childhood home, with my parents. The Yukon has an almost indefinable magic about it. I left 30 years ago, and no place I have been since has ever felt like home. Thank you for adding another element of specialness to this trip down memory lane”

Yes, the Yukon is magical.

Yes, joy is everywhere, you just have to be ready to look for it, and accept it.

Here’s the feather in its new home:

…As an aside, and for those interested, there have been about 30 pieces leave the studio since the project started in January; the pieces have been dropped around the world, from Australia to England, Canada to Mexico. Three have been reported as ‘found’, although I’m confident all have been found and enjoyed! Of those found, one was reported from the USA, one from Portugal, and now this one, in northern Canada. By all accounts, it is thrilling to have these three stories to share – all my hopes and dreams for this project are being realized! Stay tuned, friends, as there will be many more stories to come…

Here’s the first piece of art that will leave the studio – number one. A blue jay, seen at a bird feeder over the December break. Shimmering feathers, regal crest. Voracious in its eating habits. These corvids can clear a feeder in minutes, it seems.